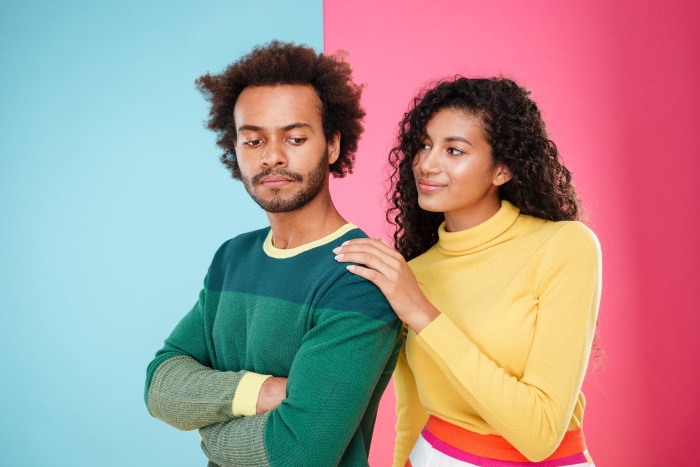 I already know what you want to do, especially if this woman is really beautiful.

You want to forget about the fact that she is married. The last thing you want to think of is her husband.

No, I’m not just talking about the potential pregnancy or STDs that you don’t want.

I’m talking about the emotional impact this decision can have on her life that especially on your life.

I mean, yeah. Every human being on this planet is responsible for their own decisions and for their own emotions…also when it comes to extramarital affairs.

You can’t change the fact that this woman is flirting with you.

What do you can change, however, is how you react when she is hitting on you.

1. What to do when a married woman flirts with you? Have empathy for her husband

Unless you are a psychopath you have something that is called empathy.

Empathy allows us human beings to understand the situations of other people and to make decisions that don’t hurt other people.

It allows us to feel the pain that others might feel because of a certain decision we make. And because of empathy, we don’t make this decision.

I want you to have empathy for her husband.

This is the number one reason why I never allowed myself to sleep with a woman who is in a relationship or who is married, no matter how much she was flirting with me.

I just couldn’t do it because the empathy I had for the partner of the woman who was flirting with me stop me from pursuing her.

Put yourself in his shoes.

How would you feel if you found out that your wife was sleeping with another man?

How would you feel if you found out that the woman you love was just in bed with another man?

Do you really want to do this to another man?

A lot of men have the opinion that if she’s flirting with me and she wants to cheat, she would also cheat with another man.

And yes that’s true, there’s a very high chance that she would cheat anyway. But just because a married person wants to cheat doesn’t mean it has to be with you.

Ask yourself if 10 minutes of pleasure are worth the maybe days or weeks of bad consciousness that you will experience after you sleep with her.

Do you really want to hurt another human being?

One day you might be married and then you will understand why empathy is so important in this situation.

2. Understand the different levels of flirting

Does she give you a compliment?

Does she smile at you every now and then?

But what if she’s touching you, whenever she has the chance to touch you?

And what if she doesn’t just touch you in a friendly way but she doesn’t away that couples touch each other?

What if she tries to get so close to you that she’s almost kissing you?

And what if she smiles at you in a seductive way while telling you that she’s really unhappy in her marriage?

Always remember that there are different levels of flirting.

If she flirts in a very innocent way and in a way that communicates to you that she’s just having fun, then you’re not in the danger zone.

But if she touches you in a way that she would never do if your husband was standing next to her, then you are in the middle of the danger zone.

3. Have an innocent conversation with her

…unless you want to hook up with her, which is something that I wouldn’t do.

So what if you decide to follow my advice and you don’t want to pick up this married woman but you still want to be friendly.

Just have an Innocent conversation with her, no matter how much she wants to talk about naughty things with you.

As a man who describes himself as honorable and who has values, that’s exactly what you do.

4. Let her know when she goes too far

It’s totally ok to tell her when she goes a bit too far.

If you feel uncomfortable when a married woman is flirting with you, then let her know that she makes you uncomfortable.

You can even tell her that you are not the kind of guy she’s looking for, at least when the flirting gets really heated.

I know that this is a hard thing to do because nothing feels better for a man than a woman who throws herself at him.

And of course just like with all the advisors share with you here, it’s totally up to you if you follow my advice or if you decide to ignore it.

Just keep in mind that the price you might have to pay for going too far can lead to a lot of drama in your life.

5. Don’t tell her husband about it

A lot of dating coaches will tell you that the best decision you can make is to tell her husband about it.

I disagree because women can be great actresses. They are so good at playing the innocent victim.

The moment you will tell her husband about it is the moment when she will blame you for flirting with her.

Believe me, you don’t want to put yourself in this position.

6. She might just want to see if she still got it

You hope that you just want to see if she still got it.

Maybe you are lucky and you can enjoy her flirting with you without being tempted to do something that you will later regret.

That’s the case when she’s just loading with you because she wants to see if you respond to her flirting attempts.

She might be frustrated in her marriage and she wants to know if she is still attractive to other men.

This woman doesn’t have the intention to seduce you or to sleep with you. She just wants to be seen and appreciated for her beauty.

This is the best possible situation when a married woman is flirting with you.

7. Think about the consequences before you do something stupid.

But what if she has the goal to seduce you?

I shared many tips and my personal opinion with you in this article. In the end, it’s up to you what you do when the wife of another man is hitting on you.

Just think about the consequences before you do something stupid.