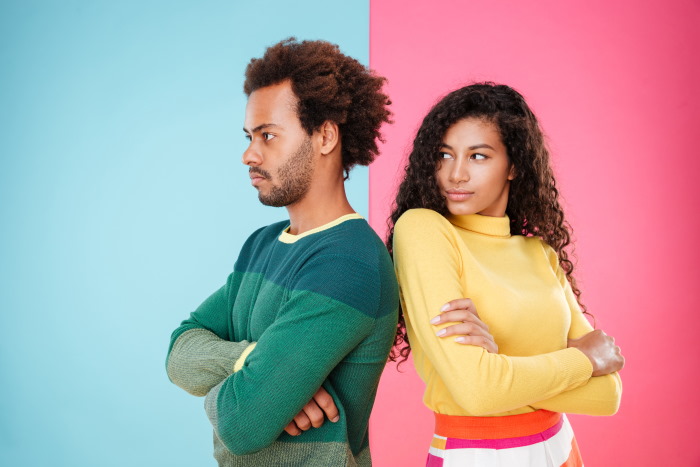 These are the 11 signs your ex-girlfriend has moved on.

I have to warn you.

Reading this article can be very painful for you.

It can be painful because you might be going through a breakup right now.

Or maybe your breakup is already a couple of days or weeks past but you still think about your ex-girlfriend.

You want to get her back.

You can’t stop thinking about her.

As a man, it’s important to know when persistence is still honorable and when it’s time to move on.

Today I want to share the signs with you that shows you sometimes very clearly and sometimes in a subtle way that it’s time to move on.

1. Some of the signs your ex-girlfriend has moved on are quite painful

I want to say it again before I jump into the first sign.

You male eagle might rebel against some of the signs that you’re reading about in this article.

You don’t want it to be true.

But it’s important that you realize that even though the truth hurts it can also set you free.

It’s way better to know when it’s time to move on than to continue trying and getting more and more miserable in the process.

2. She has returned all the gifts you’ve ever given her

This is one of the most painful signs your ex-girlfriend has moved on already.

Maybe you have written her a love letter a couple of years ago.

Maybe you bought her a special necklace that should remind her of you.

Now she has given you all these gifts back.

This means that she no longer wants to have any memories of you in her life.

Of course, this can be a sign that she wants to avoid the emotional pain of remembering the time with you.

But it’s also a clear sign that she wants to move on and that she’s ready to let go of you.

3. She gets irritated whenever you ask her to meet

You want her back.

But she doesn’t want you back.

And you know that she doesn’t want you back because she gets irritated whenever you ask her to meet you.

She doesn’t want to go on another date with you because she no longer wants to date you.

Just like many of the signs your ex-girlfriend has moved on that I share with you in this article, you don’t want to hear about this.

But it’s important that you hear these words.

If she gets irritated when you try to meet her or when you ask her out, it’s time to accept that she has moved on.

4. She has already replaced you with another dude

This is one of the most obvious signs.

This means that she no longer wants you and at this point, you have to ask yourself if you really want to try it to get her back.

If she’s already with another man, you should accept your defeat.

It’s time to move on.

5. One of the clearest signs your ex-girlfriend has moved on is when she doesn’t respond to your texts or calls

She no longer responds to you when you’re trying to reach out.

That’s the moment when you have to realize that you should no longer be reaching out to her.

This is one of the signs your ex-girlfriend has moved on, that most men ignore.

And By ignoring the sign, you involuntarily put yourself into the creepy category.

That’s not a category where you want to be.

You want your ex-girlfriend to remember you as the confident man that she once loved.

But if you continue to text her and call her even though she doesn’t respond to you, you communicate the opposite of confidence.

6. She avoids your mutual social circle whenever you are coming

Let’s say you have a social circle that you share with your ex-girlfriend.

You have the same friends and you usually go to the same parties.

What if your ex-girlfriend knows that you will show up?

If that’s the case, you have to move on.

Then you should also be gentleman enough to communicate to her that you will no longer pursue her and that she doesn’t have to be afraid of that.

She might be avoiding the social gatherings because you are already pursuing her way too much even though she shows you that she’s no longer interested in you.

7. She tells you very directly that you have no future together

This is one of the clearest signs your ex-girlfriend has moved on and this should also be one of the signs that you respect.

If she tells you in a very direct way that she doesn’t see a future with you, you shouldn’t even think about pursuing her more.

What you should be thinking about in this situation is how you can create a future for yourself that is even better than the past you were experiencing with her.

8. She deletes your pictures on social media

If she has deleted these photos or she’s in the process of deleting them, you can assume that she’s no longer interested in you.

She deletes your pictures on social media because she wants to move on.

9. She unfollowed you on social media and maybe even blocked you

Now she’s taking things to the next level.

Women usually only do that when the man they are dating doesn’t respect their boundaries.

Now you have to ask yourself the following question:

Why did it have to come to that?

Maybe you could have prevented this from happening by simply respecting her decision to move on after your breakup.

10. She makes up excuses why she can’t see you

Let’s assume for a moment that you call her and she picks up the phone.

You ask her out because you want to get back together with her.

You can hear in her voice that she’s disingenuine and the excuses that she comes up with don’t sound reasonable.

Yes, I’m talking about the excuses to not meet you again.

She tells you that she doesn’t have time even though you know that she’s free at that time and day.

She tells you that she has to do things even though you know that she doesn’t have to do any of the things that she mentions.

This is one of the signs your ex-girlfriend has moved on that can be a bit ridiculous.

But you have to understand that she only makes up excuses because she doesn’t want to hurt you even more.

Just ignore the fact that these excuses are sweet little lies but respect her decision to move on.

11. Your ex-girlfriend has moved on when she makes absolutely zero effort to interact with you

Does she make any effort to interact with you?

If she doesn’t reply to your text messages and she also doesn’t initiate the texting conversation, she has moved on.

If she never calls you and she avoids picking up the phone when you call her, she has moved on.

Allow her to move on and do the same.

A bright future is waiting for you but you have to create it for yourself.