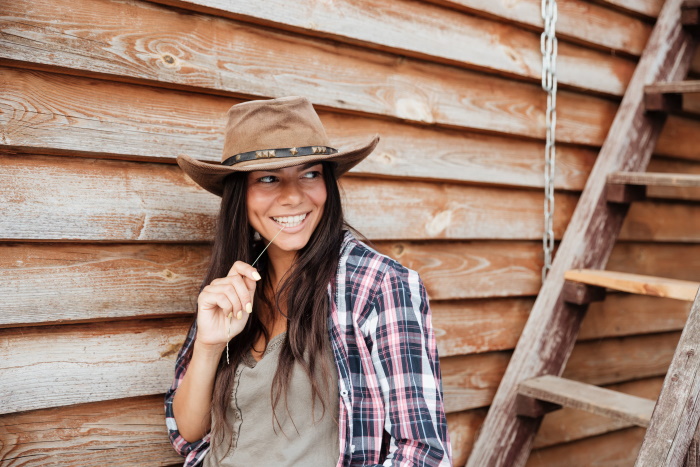 I’m sure you’ve been in the situation before. And I’m also sure that you’ve asked yourself this question at least once in your life.

Yes, nothing worse than being convinced that a woman is totally into you and desires you, just to find out that everything was a lie.

It’s not that she lied to you on purpose.

She was just being nice but you were the one who completely misunderstood her signs.

I know…you want to blame her for her behavior. You want to say something along the lines of “it’s all her fault.”

But one aspect of being a mature man is to take responsibility for your life and also for your thoughts.

Your thoughts might have played a trick on you.

1. Is she Flirting with me or just being friendly? Details matter!

The details are so important.

Don’t get me wrong.

2. The way she touches you

Does she touch you?

That’s already a very good sign but it totally depends on how she touches you.

If a woman just touched you in a friendly way without any sensual intent, she’s probably just being friendly.

…this means that she’s flirting with you.

When you are really honest to yourself you can distinguish between a friendly touch and a touch that is a little bit more sensual.

Most men believe that when she gives you a high five or when she accidentally brushes against your arm…that this is a clear sign of interest.

It can definitely be a sign of interest but only if your body language and her facial expression reveal her desire for you.

3. The way she looks at you

Her eyes reveal the truth.

A woman who wants you will look at you in a certain way.

Her pupils get bigger while she’s looking at you and her breath gets heavier when you are moving closer to her.

That’s when she wants you to kiss her.

But what if she looks at you in a way that communicates that you are a harmless guy in her eyes?

You know, when a woman looks at you as if you were a puppy and not a tiger.

This means that she’s not flirting with you and she’s also probably not interested in you in a romantic way.

The way she looks at you matters if you want to find out if this woman is flirting with you or not.

4. The way she texts you

Does she text you with emojis or without emojis?

The woman who is totally into you will use the wink emoji and the kiss emoji in almost every text message.

Her text messages will also contain a lot of hehe and haha. That’s what women do when they really like a guy.

You always have to remember that women act like playful teenagers when they are into a guy, no matter how old they are.

If she, however, sends you text messages without any emotional energy… Then she might not be that into you.

Have another closer look at the text messages that she already sent you. The emojis and the energy behind the message reveal the truth.

5. The way she compliments you

How does she compliment you?

When a woman tells you that you are a really nice guy and that she likes how friendly you are…be careful.

The words nice and friendly are not what a woman uses when she is really attracted to a man.

When a woman is attracted to you she might give you a compliment that is focused on your physical appearance.

This woman is looking for a long-term relationship then she might also complement certain boyfriend qualities that she sees in you.

If she gives you a compliment about your altruistic nature, you can confidently assume that this woman wants a long-term relationship with you.

But telling you that you were such a nice guy is not the compliment that you want to hear.

6. The way she asks you questions

It depends on what kind of questions she asks you.

You have to understand that a woman who is interested in a man will ask him very personal and deep questions.

She wants to find out everything about him because she wants to be able to trust him.

No woman on earth can start a relationship with a man who she doesn’t trust. That’s why you’ll feel like in a police interrogation.

These are the kind of questions that a woman might ask you when she’s totally into you.

On the other hand, a woman who is just being nice will ask you more superficial questions. She’s just trying to have small talk.

The deeper her questions, the stronger her attraction for you.

7. The way she reacts when you talk with other women

How does she react when you talk to other women?

A girl was just being friendly and who doesn’t have any romantic interest in you just won’t care.

You could talk to the hottest girl in the mall or the cutest waitress at the restaurant…she won’t get jealous.

But what if she likes you?

Then she will show obvious signs of jealousy. Or at least you can see that she’s trying to suppress her jealous feelings.

All you have to do to find out if a woman wants you in a romantic way is to observe her behavior when you talk to other girls.

The way she looks at the girl you were talking to reveals everything.

Does she get jealous?

Does she get nervous and irritated?

This woman doesn’t just want to flirt with you. She wants to be your girlfriend.