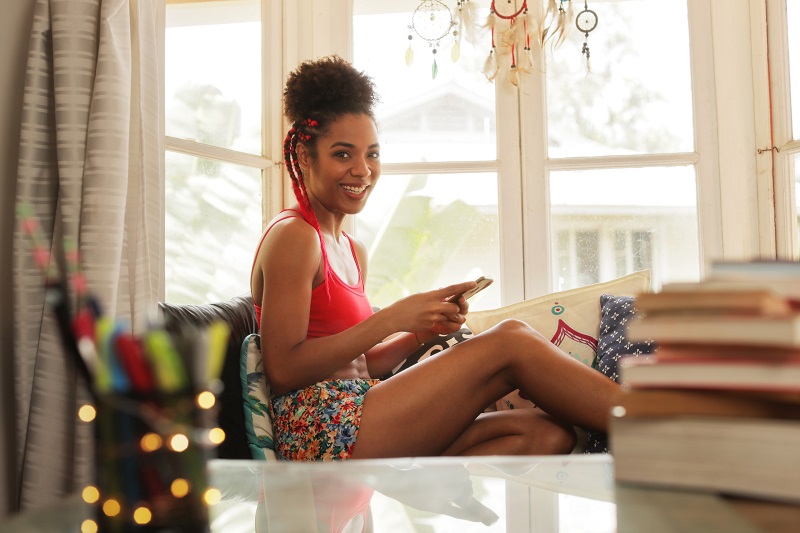 You want to learn how to tell if a girl likes you over text. This means that you’ve gotten her number and now you’re ready to make her yours.

Please allow me to congratulate you on getting that girl’s number. You did a great job. At least I’m sure you did.

Otherwise, she wouldn’t have given you her number. But we both know that having the magic digits in your phone is just the beginning.

You have won the battle but you haven’t won the war…yet. Now it’s time to get your canon ready (no pun intended) and to rock her world by using your smartphone.

But hey, what if you already rocked her world?

Let’s have a look at how to tell if a girl likes you over text. If she shows any of the following signs, she’ll go on a date with you…

Women love to communicate with emojis or smileys…or however you want to call these mostly yellow things. No, I’m not talking about the minions.

I’m talking about the pixels that have the power to make your heart jump up and down like a kangaroo.

Did she send you a laughing emoji? She already likes you and enjoys talking to you.

And she thinks that you’re funny…or she likes you so much that she wants to make you believe that you are in fact funny.

Did she send you a kiss emoji? She already likes you a lot and it’s very safe to say that this girl will go out with you. You just have to ask her.

Did she send you a kiss emoji with a heart like a kiss?

Believe it or not but the meaning behind these two kiss emojis can be very different. If you see the heart, she really likes you.

She starts the texting conversation

And she also likes you when she’s the one who initiates the texting conversation. But let me be honest…

Most of the time that won’t happen.

The majority of women are way too afraid of rejection to ever start a texting conversation. However, some girls do it.

As a man who wants to know how to tell if a girl likes you over text, it’s your job to celebrate whenever that happens.

It’s not a miracle but it’s the closest you’ll get.

When a woman starts the texting conversation once, she likes you.

And when the same woman initiates again and again…well…then you have to work really hard to mess it up.

She sends you a voice message with her cutest voice

Have you ever received a voice message from a woman you like? How did she talk to you? With the cutest voice or did she sound like a broken chainsaw?

In case she sounded like the sweetest girl on planet earth, you are a lucky man. Then you already know how to tell if a girl likes you over text.

I’m serious. She likes you. She’s into you. There’s no doubt about it. I mean, otherwise she wouldn’t send you a text message in the sweetest voice you can possibly imagine.

She does that because she knows that you can’t resist her and that communicating her interest with her voice is the fastest way to make your heart jump and to wake up other parts of your body.

And don’t be shocked when she doesn’t sound as cute on the first date as she sounded in the voice messages she sent you the day before.

She practiced a long time to sound cute in her text message. Forgive her if she needs some time to get into her cute voice again when you meet in person.

Her response rate is faster than lightning speed

How do you know if a woman likes you over text?

She responds fast. And I mean very fast. In other words, she does the opposite of what a woman does who doesn’t have any interest in you.

Every man who has ever been in the friend zone knows how it feels when a woman has zero interest in him.

You text her. No reply.

You text her again. Still no reply.

You send her a text message and two seconds later you see that she has already read the message.

Then you wait another five seconds and there comes the reply with two kiss emojis. That’s what women do when they are really into a guy.

What if you have the guts to not immediately reply to her text messages? God forbid, you have to work!

Then she might send you another text minutes or hours later. It’s a small act of desperation and yes, women also do this.

It’s not just friend-zoned dudes who fall into this trap.

Yep, that’s how to tell if a girl likes you over text. If she didn’t like you, she wouldn’t care about how fast you respond. In fact, she wouldn’t want you to respond at all.

But because she’s totally into you, she waits by the phone and prays to the Gods above that you’ll reply fast.

She sends you pictures and maybe even special pictures

Sooner or later it will happen. But for now it’s already great if she sends you one or two normal selfies in which she presents herself fully clothed.

Fully clothed is better than nothing. It means that She likes you and that she trusts you. Keep in mind that women only send selfies to men who they trust.

The more she reveals of herself and her body the more you can assume that she trusts you…and that she wants you.

Her answers are longer than one word or one sentence

When a woman is not interested in you, she’ll send one-word answers. Or if you are really lucky she’ll send you a whole sentence.

What if a woman likes you?

If that’s the case, her text messages can get long…really, really long. The more text she puts in her message, the bigger her crush on you.

It’s always a good sign when a woman texts you a lot. Even though you have to read more, I’d never complain about it. She does it because she likes you.

And because she likes you so much, she also asks you a lot of questions. She does that because she wants to find out everything about you.

Let her know who you are and show her that she can trust you. Then you can also her out and she’ll immediately say “yes” when you send her the “let’s go on a date text message”.