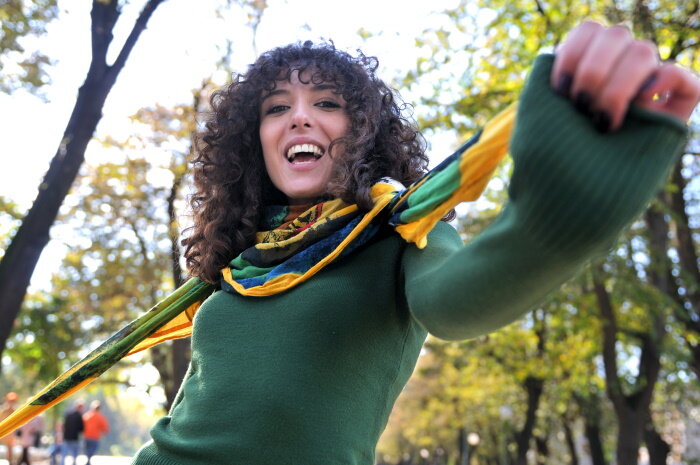 You want to learn how to know if a girl likes you but is hiding it.

Why is she hiding the fact that she likes me?

Well, girls are complicated. They want you to know that they desire you. But they also don’t want you to get the idea that they are easy and that they show their interest to anyone.

And when you are really honest with yourself, you do the same with women. Or at least a lot of men do it.

They hide their affection.

A lot of men do this because they are terribly afraid that the woman they have a crush on thinks that they are needy or desperate. That’s why they suppress their feelings and wear this mask.

Today I want to show you how you know if a girl likes you but is hiding it because you deserve to know when a woman is into you. Only then can you make a move on her.

And don’t be fooled. She wants you to make a move on her. Otherwise, she wouldn’t try so hard to hide the fact that she’s attracted to you.

That’s why it’s important that you listen to her body instead of her words.

1. How to know if a girl likes you but is hiding it: Look at her body

Her body reveals the truth.

The big mistake that so many men make when they want to find out if a woman they are on a date with actually likes them, is that they listen to her words.

I’m sorry to break it to you but her words are almost meaningless.

I say almost because sometimes she might accidentally say something that reveals how much she’s digging you. But most of the time women are very good to keep their cute mouths shut.

However, it’s a lot harder for them to control their actions, especially when their actions are influenced by strong emotions.

In other words, she might tell you with her words that she’s not totally into you. But if her actions say the opposite, then please don’t make the mistake and believe her words.

Actions speak louder than words, especially when it comes to learning how to know if a girl likes you but is hiding it from you.

2. She acts nervously around you

Her attraction for you is so strong that she acts really nervous. And that’s the last thing she wants to do. She’s trying her best to act cool.

The moment you tell her how beautiful she is, she smiles at you with a big bright smile and her eyes turn into sparkling diamonds.

That’s how much she likes you.

When you then also touch her shoulder, she’s melting like snow in the heat.

The way she looks at you while she’s blushing and nervously biting her lips tells you everything you need to know. Yes, that’s how to know if a girl likes you but is hiding it.

She’s definitely into you.

3. She tries to suppress her jealousy

She’s not jealous, no she’s not!

That’s what she’s trying to tell herself in her mind. But it doesn’t work. The moment you talk to the cute girl you know from high school, her jealousy radar goes through the roof.

She’s ready to attack this woman with a knife and 10 rocket ships.

At the same time, she tries to control her emotions. I mean, she doesn’t want to appear needy or overly clingy.

Instead of making a scene, she looks at you with a bright smile but you can see how her head slowly turns into a big red tomato. That’s how to know if a girl likes you but is hiding it.

She wants to look you into the eyes but her attraction for you is just too strong.

That’s why she looks to the ground whenever you try to hold eye contact with her. She blushes and she acts reserved.

But you can see that she’s slowly turning into a volcano that could erupt at any given moment.

5. She acts shy after she touched you

She can’t stop herself.

She wants to touch you so bad and that’s why she places her hand on your leg. That’s the sign you’ve been waiting for.

Now you know that she wants you.

But wait, one moment later she pulls her hand away and acts as if she was not interested in you. You are confused.

She’s just acting like this because she really likes you. After touching you she realized that she might have shown her interest too much.

That’s why she acts like that. But she likes you. I promise.

6. She pretends that she didn’t just try to impress you

What if she lists her girlfriend qualities?

And what if she tells you that she can cook?

She wants to impress you. She wants you to think “wow, she’s the woman I always wanted”. Enjoy this moment. Don’t ruin it.

Please don’t call her out for trying to impress you.

This would make her even more reserved. You want her to open up. That’s why the best reaction you can show is a seductive smile. That’s all you have to do.

7. She pretends that remembering details is not a big thing

She remembers your birthday.

Heck, she even remembers your dog’s birthday.

And while she remembers these details about you, she pretends that it’s not a big deal. She tells you that she remembers all of her friend’s birthdays.

I wouldn’t believe her.

There’s a high chance that she only remembers your birthday because she really likes you. That’s how to know if a girl likes you but is hiding it.

Her energy changed in a way that you can’t explain.

She looks at you differently. Her touch is less friendly and more seductive. The fact that she no longer treats you like a friend is a clear sign she likes you but is hiding it from you.

Yep, this woman is into you and you can feel it.

9. She gets excited and then tries to control herself

Why would she get excited?

She gets excited but she tries to control herself because she doesn’t want to show you how excited she really is. Deep inside of her, a band is playing and she is jumping up and down.

She tries to hide it from you because she wants you.

10. She asks personal questions and pretends to not care about your answers

This girl wants to know everything about you.

That’s how to know if a girl likes you but is hiding it because when a woman wants you to be her boyfriend, she asks you question after question.

She wants to know every little detail about your friends, your family, your business, your career…everything. And she does that because she wants to find out if you are boyfriend material.