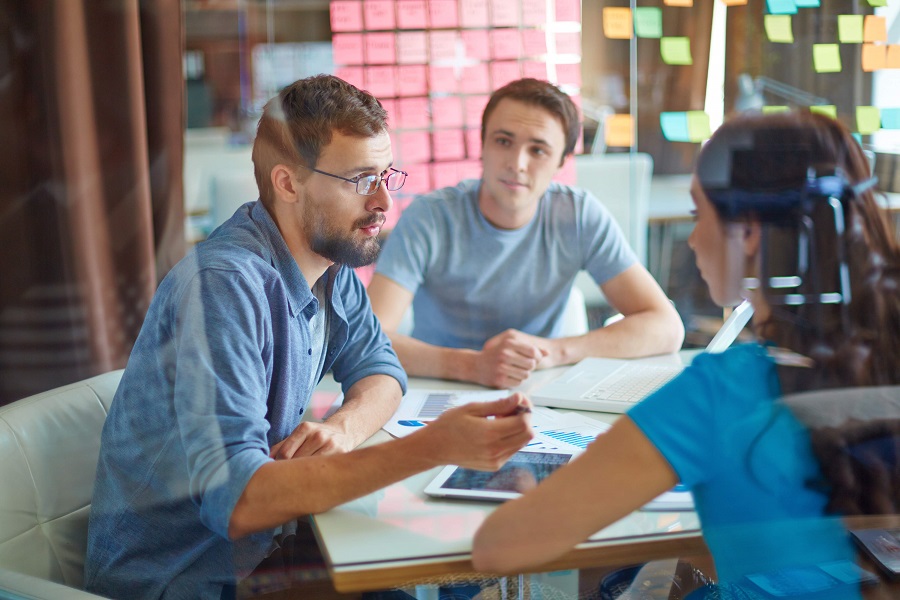 You want to know how to approach a girl at work.

I bet it’s because of the cute secretary who’s working at your office. Or maybe you started a project with a beautiful woman from another division.

And now you want to know how you could possibly approach her, talk to her, and make her your girlfriend.

You want her so bad but you also don’t want to get fired.

The uncomfortable truth about how to approach a girl at work

If you want to talk to a woman at work, you are putting yourself and your career at risk…at least in certain situations.

Your boss being jealous because he has a crush on the woman you approached. Other coworkers talking about you and her behind your back.

Things can get messy in an office environment.

Most men tend to switch off their brains as soon as they think about the woman they want to win over.

But that’s dangerous. I don’t want you to make a mistake that you’ll regret later.

In this article I want to show you how to approach a girl at work. I want to share the pitfalls and potential mistakes you want to avoid.

But I refuse to lie to you.

The uncomfortable truth is that dating at the workplace and approaching women at work has never been more difficult and riskier.

Know the regulations when it comes to dating at the workplace

I don’t even know if it’s legally allowed to forbid relationships at the workplace. It’s probably not.

But that doesn’t stop some companies from having very strict “no dating” rules in their companies.

Especially in the last couple of years more and more companies fear negative press or scandals because of workplace affairs and workplace relationships that end with more drama than a Spanish telenovela.

I just want you to be aware that you are taking a risk by learning how to approach a girl at work. Of course, there can be a huge reward. But it’s a risk nonetheless.

Only approach a girl who you want to make your girlfriend

Don’t even think about approaching a girl to hook up with her. That’s the worst mistake you could possibly make.

And no, I don’t care if she has the best body in the whole company.

Risking your job is simply not worth it for a hook up, no matter how exciting it might be in your fantasy.

This only leads to drama and disappointment and when you are honest to yourself you know it.

Only approach a woman at work when you are so into her and so in love with her that you can imagine a relationship with her.

nd not just any relationship. I’m talking about a relationship that can withstand the office talk and the jealous eyes of your coworkers.

Don’t do it unless she’s that important to you.

This is so important. The last thing you want to do is to approach a woman who is on a lower hierarchy level than you.

And yes, I know. The typical office romance is between the manager and the secretary.

But you have to understand that we are no longer living in the 90s. We are living in a different era.

Nowadays all a woman has to do to ruin your career is to say “he harassed me” and everyone will believe her…nobody will believe you.

As a man, you don’t have a chance in these situations. And especially when she is working for you or is on a lower hierarchical level in the company.

Everyone will think that you – the evil manager – took advantage of the poor secretary. And then you are screwed.

Why would she do this?

Then I want to ask you:

Do you know what women who are hurting are capable of doing after a breakup?

I don’t say that all women will do it. But if you approach the one girl out of 100 you might do it, you are again screwed.

That’s why it’s absolutely crucial that the woman you approach has no benefit of dating you and that there is no power dynamic. I’m talking about zero power dynamic.

Then you can approach her because you have (almost) nothing to lose.

Start the conversation in a casual way

When you then start the conversation with a woman at work, you should be as casual as possible.

Even though I’m a big fan of approaching women in a direct way by letting them know how you feel, I wouldn’t do that at work.

She just has to (on purpose) understand it the wrong way and…I have to say it again…you are screwed.

The art of approaching a woman at work is about communicating your interest with your body language while you use very innocent words.

Let your body speak but don’t use any words that are too flirtatious.

Before you take this step you have to know that she feels the same way about you.

That’s why it’s important to…

Look out for body language signs of interest

If you would approach her at the mall or at the bar, she could tell you directly if she’s interested in you.

That would make things easier.

But you are here because you want to learn how to approach a girl at work.

You don’t want to take the easy way out.

She also has to pretend to be all professional and adapt to the office culture.

That’s why she most likely won’t tell you how she feels…at least not directly.

She will, however, communicate her internet for you with her body.

Look out for body language signs of attraction. As a man who wants to approach women at work, you have to be aware of these signs.

Leave the option to say no to the date wide open

Do you have the feeling that she likes you?

Let’s say her body language screams “make a move on me” and the way she looks at you says “I want you too.”

She gave you the green light. It’s time to ask her out. She will say yes…but only if you choose the right dating venue.

And because you just learned how to approach a girl at work, you have to think about a dating venue that’s far away from the office building.

Social judgment is your enemy.

If there’s one thing that women are afraid of then it’s social judgment.

Suggest a venue for your first date that’s far away from your office and the chance that she’ll say yes is very high.