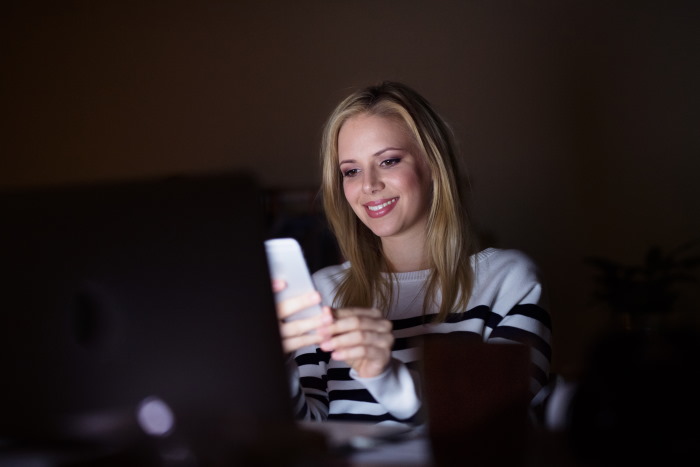 You are here because you want to know if double texting a girl is ever okay.

And I’m pretty sure that you’ve already made this mistake in the past.

Or maybe it isn’t even a mistake.

Maybe it’s something that’s actually smart to do.

That’s what I want to discuss with you in this article about double texting a girl.

I know that a lot of men have fallen into the trap of sending double texts and then afterward regretted it.

But I also know some stories where double texting a girl has actually worked out pretty well.

Sometimes this action which a lot of people define as a big mistake has led to successful relationships.

And that’s why I want to answer the question:

Is double texting a girl ever okay?

1. What double texting a girl means

Let’s first have a look at what double texting a girl means.

And because I haven’t found any Wikipedia definition I decided to come up with my own definition.

Double texting a girl means that you text her again after you sent her a message that she hasn’t replied to or she hasn’t even read yet.

You text her again.

Is it okay to do that or is it a really stupid idea?

2. It’s okay if she hasn’t read the message

Some people are just insanely busy.

I wouldn’t say that I’m insanely busy but I definitely am quite occupied in my day-to-day life.

As a result, it happens that I every now and then forget to reply to a text or just don’t see it.

If she hasn’t even read your message yet then it can be that she hasn’t seen the message because it was drowning in all the other messages on her phone.

On these platforms, girls get bombarded with messages from guys they have never met and guys they would rather not want to meet.

She hasn’t even read your message yet and you can see it in the messenger app that you’re using, it’s okay to double text her again.

I would at least wait a couple of days to give her the chance to read it and to reply and if you don’t hear from her then send another text.

3. It’s okay if she has already shown a clear interest in you

What if this woman has shown a clear interest in you on the first date?

She’s definitely into you and you can feel that she is attracted to you.

Now you sent her a text message in which you ask her out on another date.

In your text message, you tell her exactly when and where you want to meet her.

But then you don’t hear from her again.

In some cases, especially if you can be confident that she’s into you, she might take some time to reply because she first wants to make sure that she’s really available during this time.

Give her another one or two days and if she doesn’t reply to you then you can contact her again.

4. Double texting a girl can be the only way to reactivate the conversation

In case you’re asking yourself if double texting a girl is ever okay, please answer the following question.

What other chance do you have?

Of course, you can still call her but then you risk being awkward during the conversation because you don’t know if she wants you to call her or not.

Texting her again it’s the only way how you can actively re-engage her in the conversation.

It’s the only way to reactivate the conversation and to take things further with this woman.

…well… You have to push your ego to the side because it’s basically your only chance.

Just do it. You have nothing to lose.

5. Double texting a girl can be seen as needy and desperate

However, I have to admit it.

Double texting a girl can be seen as needy and desperate.

…or you give up without another try and you move on.

In this situation, I personally don’t care about my ego because I see it realistically.

I rather take this chance than missing out on the opportunity to meet an amazing girl.

6. Don’t double text a girl if she has read the message and you asked her a question

What if you asked her a question and she didn’t reply to it even though she has read it?

In case it’s a question that has to do with you asking her out to a specific place and at a specific time, I would still double text her.

Then she might just be waiting to figure out if she actually has time to meet you or not.

What if you ask a question about your hobbies or about her personality?

In this case, you can assume that she’s just not interested at least if she has clearly read the message.

Case she has shown clear interest before, you can still think about giving it a shot. That’s then up to you.

7. It’s okay to double text her when you know that she gets a lot of messages

Does she have a very demanding job or is she running her own company?

Then double texting a girl is always a good idea.

She might just get buried in text messages and she simply doesn’t see your message.

Send her another text and see how things work out.

8. Sending another text can show her that you are really committed to getting to know her

Sometimes women actually prefer it when a guy double texts them.

These are the women who want to be pursued and conquered.

These are often very traditional women and you find this very often in traditional countries.

These women expect you to always initiate the conversation and to every now and then initiated twice in order to show how much you desire them.

9. Double texting is okay but don’t triple or quadruple text her

I hope you now understand that double texting a girl is not always a bad idea.

Even though we can see needy and desperate, it’s often your only chance to find out if you have a connection and maybe even the future.

Just make sure that double texting is really your last try.

If she doesn’t read the text you sent her after the initial text or she doesn’t reply to it when she reads it, it’s time to move on.

Double texting a girl is okay but triple or quadruple texting her is desperate and will achieve the opposite of what you want to achieve.